Who should read this document¶

This is a detailed document about the "sample type" and "sample rate" properties of a Vamp plugin's output descriptor.

The original Vamp documentation sources leave some ambiguities, and this document hopes to help clear them up.

If you are writing a plugin, read the "Rules of Thumb" section (below) after the Programmer's Guide. You probably won't need to read the rest of this document. You should use the Vamp Plugin Tester to test your plugin.

If you are writing a host, you should probably read the whole of this as well as the Guide. You should also use the Vamp Test Plugin to test your host's interpretation of the feature structures.

Rules of Thumb for Plugin Developers¶

A Vamp plugin receives audio and produces a series of descriptive feature structures.

Features are each associated with a particular output of the plugin. The plugin declares that each output has certain properties, which constrain the sort of feature data the host can expect to see. (See diagram.) 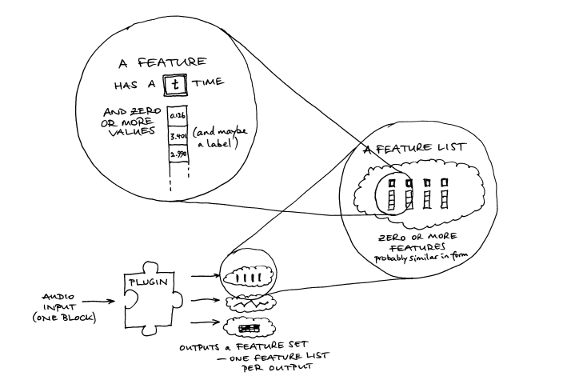 A feature may or may not have a timestamp (as well as, optionally, a duration). Whether a timestamp is needed -- and, if it is provided, what it means -- are determined by the sampleType and sampleRate properties of the output on which the feature is returned.

This is the simplest option.

If an output is declared as having a sampleType of OneSamplePerStep, then any features returned from a process call are assumed to match up with the audio block provided to that process call.

The sampleRate and hasDuration output properties are ignored for outputs of this type.

For any features returned through an output declared with OneSamplePerStep type,

There is no required behaviour from plugins for features on OneSamplePerStep outputs. The host always ignores any timing information in these features whether present or not.

OneSamplePerStep is most often used for simple measurements and visualisations, in which some internal calculation is updated on each process call and a new result returned. For example: envelope trackers; power calculations; spectrograms. These outputs are typically visualised using line graphs or colour matrix plots.

OneSamplePerStep is often used for intermediate results calculated during processing of a more sophisticated feature. For example, a beat tracker might have an auxiliary output with OneSamplePerStep type returning its internal onset detection function value.

If the OneSamplePerStep output type essentially means that the plugin leaves all time calculations up to the host, VariableSampleRate is the opposite.

If an output is declared as having a SampleType of VariableSampleRate, the features returned through it will have timestamps set by the plugin, and they won't necessarily have any relationship to the process block timestamps provided by the host.

For any features returned through an output declared with VariableSampleRate type,

Note that features do not have to go forward in time. A feature's timestamp is permitted to be earlier than its predecessor.

Features returned through VariableSampleRate outputs may optionally have durations.

If the output's hasDuration property is true, then

If the output's hasDuration property is false, then

The plugin may optionally set a sampleRate property for each VariableSampleRate output. A sampleRate of zero indicates no value.

If a sampleRate is set,

If a feature returned through a VariableSampleRate output has hasTimestamp set to false, the host should ignore that feature entirely rather than attempt to read (or guess) its timestamp.

This is a more complex case than OneSamplePerStep or VariableSampleRate.

An output with FixedSampleRate type must also have a non-zero sampleRate property.

Conceptually the sampleRate property defines a set of discrete sample times, spaced at sampleRate points per second, starting at time zero. Every returned feature must start at one of these times, whether the time is calculated and assigned by the plugin (through the timestamp of the feature) or by the host (for features without timestamps).

For any features returned through an output declared with FixedSampleRate type,

As with VariableSampleRate outputs, the spec does not forbid features on FixedSampleRate outputs from going backwards in time. A feature is technically allowed to have a timestamp earlier than its predecessor. As a pragmatic matter, though, plugins might be advised not to do this because it doesn't fit very well with users' expectations of what a fixed sample-rate feature looks like, so hosts might well have bugs in how they handle it. If you want to do this, reconsider, or at least use a VariableSampleRate output. (If you're writing a host, though, do consider this case.)

Features returned through FixedSampleRate outputs may optionally have durations.

If the output's hasDuration property is true, then

If the output's hasDuration property is false, then

If a FixedSampleRate output has a zero sampleRate, the host should ignore all features from it.

FixedSampleRate is most often used in cases where OneSamplePerStep won't work because the output can't return the features straight away. This may be because the plugin has some internal block size that differs from the processing block size, or because more than one process block's worth of history is needed to produce an output, or because the plugin works completely "offline" and produces no output at all until getRemainingFeatures is called at the end of input.

The most likely uses, therefore, are similar to those for OneSamplePerStep: block-by-block measurements, columnar visualisations, etc.

However, FixedSampleRate is also sometimes used in cases where feature timestamps are not equally spaced (i.e. there may be more than one feature per sample time, or there may be gaps) and where VariableSampleRate might be a reasonable alternative, except that the plugin author chooses to reflect explicitly the limited precision of some internal block-resolution processing step.

So, for example, a beat tracker that was constrained to processing-block resolution might choose to return beat times on a FixedSampleRate output, although VariableSampleRate plus a sampleRate property is probably more usual in the wild.