SimScene.py is a collection of tools to synthesize an audio scene from independent sound events.
It is inspired by Lagrange et al. simScene (https://bitbucket.org/mlagrange/simscene) but takes
a different direction. The goal of simScene.py is to (1) have a python implementation of such a
system since python is the platform of choice for developers accustomed with deep learning packages
or other python package candy and (2) to allow generating audio scenes from graph-based patterns.

Currently it can only batch-generate acoustic scenes with target EBRs

This code is licensed under GPLv3. Please see LICENSE for more info.

The best way to show usage of the tool is through an example of generating 10 scenes of bird sounds in the forest. First, clone the simscene repository (requires git):

Then switch to the python directory:

Then open the files forest_backgrounds.xls and forest_events.xls in the examples folder which contain information about the event and background tracks (for now do not change them, just see that you can open them). Note that you can view the same files as .txt files in the same directory. SimScene.py allows both formats.

Here is a preview of the forest_backgrounds.xls in Calc:

An explanation of the fields follows:

Backgrounds sounds are looped throughout the scene.

The events file (forest_events.xls) is a bit more complicated:

After viewing those files, we can generate an acoustic scene and generate some plots on the screen. First of all, create a directory to save the resulting files:

And it will show on screen some plots, and also generate some files in the output directory. Go on and listen to it! Some explanations: 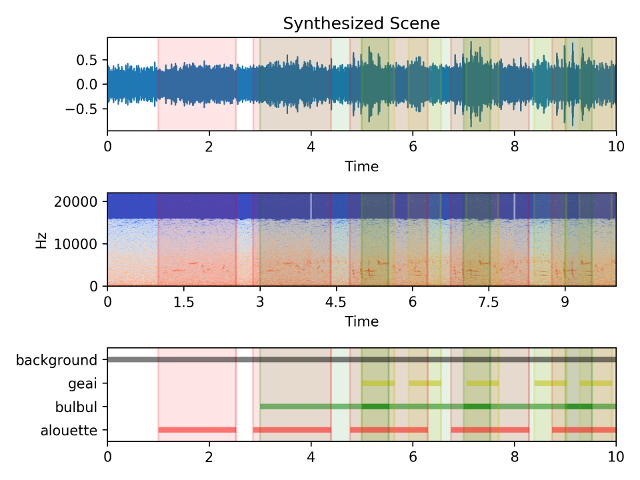 It can also generate 5 instances of the same scene at once with:

Note that you cannot use -vvv when using the -N switch (it will be ignored). To see more on the available switches, run it with:

Starting 5th October, you can also create pattern files to use in place of .wav files for events or backrounds. For example you can have the following file in sound/event:

And add annother event in forest_events.xls with sampleid: _approaching to create a scene where a series of footsteps with increasing amplitude is heard.