These notes are based on our initial meeting on 24 January 2012. The aim was to collect some use cases and have an initial idea on what needs to be done to extend or revise the existing Audio Features Ontology.

A rough list of topics discussed during the first meeting:

Use cases discussed so far:

The Audio Features Ontology currently provides a core model which distinguishes between audio features based on two attributes:

The second dichotomy addresses a representational issue, and allows for describing how a feature relates to the extent of an audio file:

Alternative conceptualisations and some examples are summarised below:

The main scope of the existing ontology is to provide a framework for communication and to describe the association of features and audio signals. It does not classify features, describe their interrelationships or their computation. It deals with data density, and temporal characteristics only and differentiates between dense signal-like features of various dimensionality, (chromagrams, detection functions) and sparse features that are scattered across the signal timeline. This core model is shown in the following diagram: 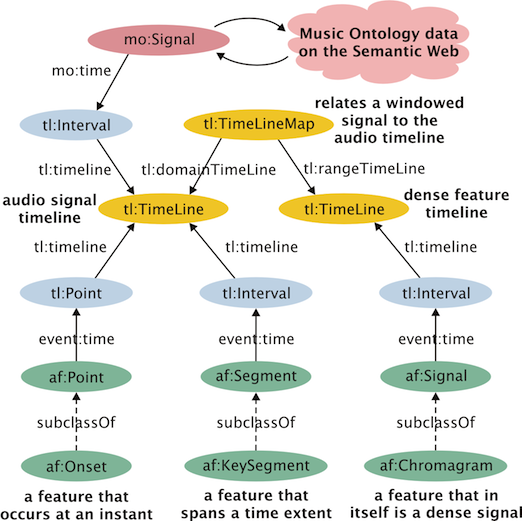 AF heavily relies on the event and timeline ontologies to refer to event in time and timelines corresponding to the duration of an audio signal or a dense signal-like feature. Here's an RDF example produced by SAWA/Sonic Annotator describing temporal segments using the ontology:

Some important questions to be decided on:

What are the strength and weaknesses of the existing ontology?¶

Some work related to Steve's use cases, segmentation and Ontologies:¶

This list needs to be extended based on thorough literature review.

Long term goals and some concrete tasks that can be done as the outcome of the collaboration:

Some immediate tasks before the next meeting:¶

See graph for how this relates to existing ontologies, ontology libraries:
http://www.isophonics.net/sites/isophonics.net/files/combined-frameworks.png